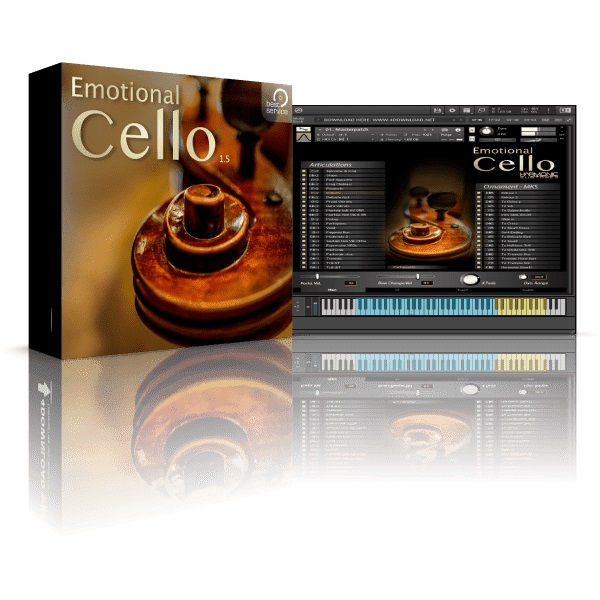 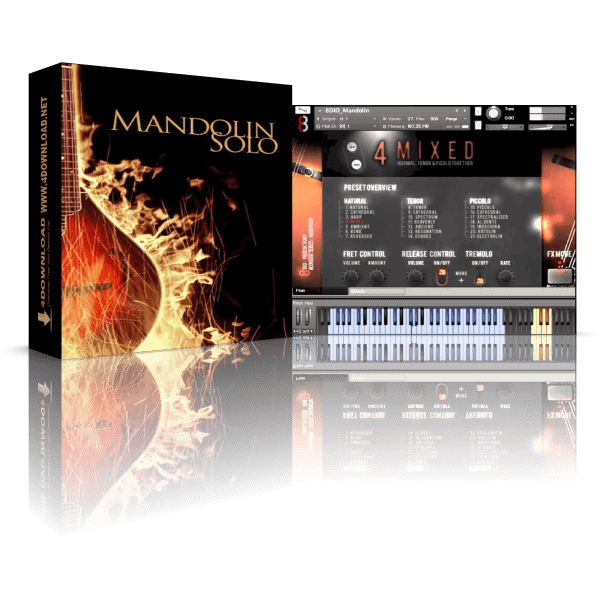 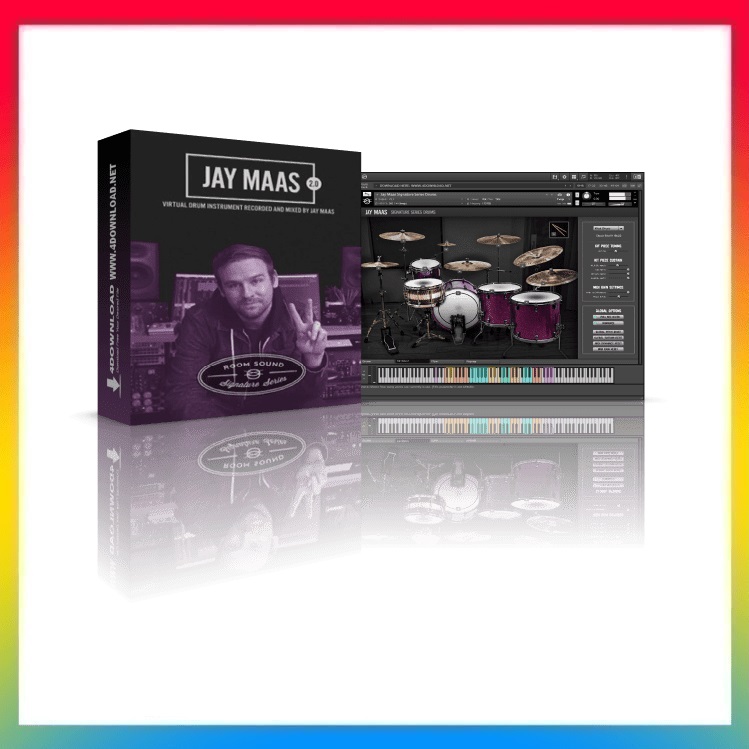 Please note that this is a digital download only nothing physical will be shipped to you. Download link and Product Key will be sent to your Email registered on julimarks.com/shop 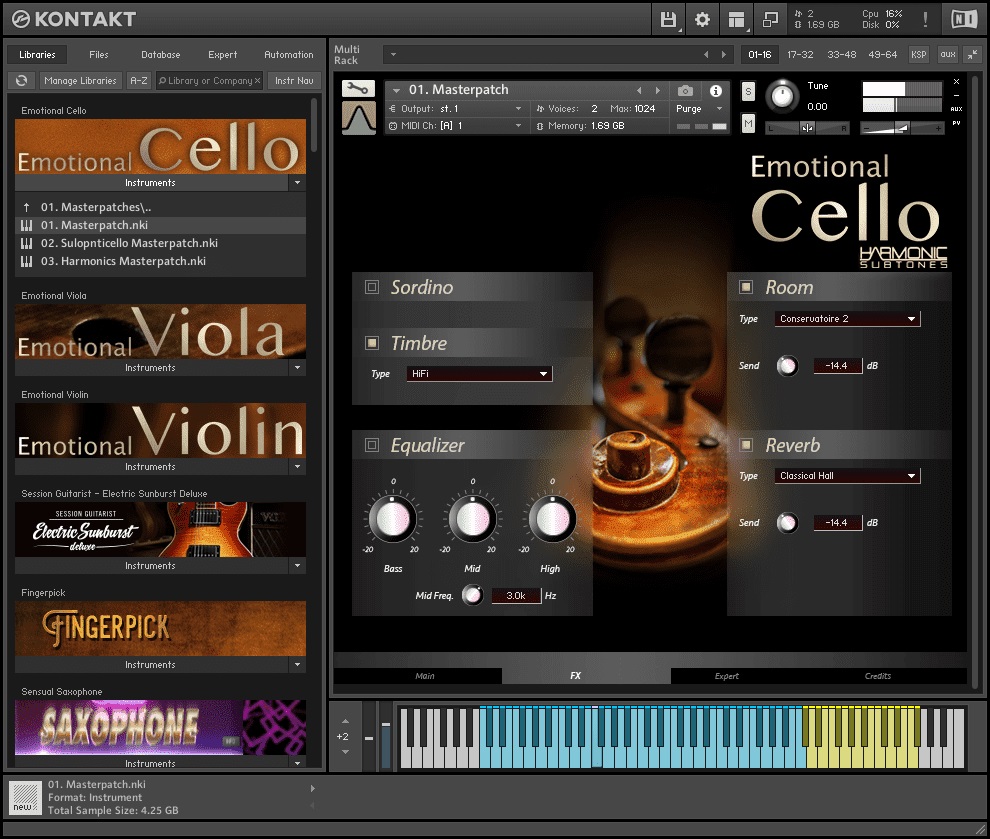 never before, a virtual instrument could be played with this level of expression. The Emotional Cello from the Munich-based developers Harmonic Subtones is a virtual instrument that features a powerful and emotional sound and opens up unknown dimensions of expression. Whether film scoring, pop music productions, songwriting, classical music or modern, avant-garde cello compositions, the Emotional Cello shines through a variety of contained articulations, a direct and unadulterated sound as well as unusual playing techniques and rebowing.

Contextual Sampling
“Contextual Sampling” is what the developers of Emotional Cello call the philosophy behind this project in which all samples are always recorded in a musical context to capture the natural bowing and expressiveness of real instrumentalists. In this approach the recordings of a real vibrato play an important role, as they are always more inspiring and organic than adding an artificial vibrato.

Emotional Cello was created from well over 100 articulations and their variants. By means of an elaborate and intelligent script, countless articulations are linked together in a meaningful way so that they follow the playing style of the user.

The library contains three master patches, including the “Emotional Cello”, the “Sulponticello” and the “Harmonic Cello”. These contain most of the recorded articulations, which logically interlock and provide an elegantly aligned sound, thanks to „True Legato“. Three different transition types have been captured in several sessions and simulate, among other things, realistic changes in bowing direction or passionate portamento while playing. The user simply controls the velocity – the tempo of the tone transitions automatically adapts to your DAW!

In addition to the Master Patch, the Emotional Cello also contains an Individuals Patch which is a set of key switch patches with different articulations of the same category such as sustains, shorts, trills and more. The Specials Patch offers some unusual articulations and effects and the Stackable Patch contains the main articulations with standardized key switching to match the stackable patches of Emotional Violin & Emotional Viola.

Selection of the included playing styles:

The Effects
In order to customize the sound of the Cello according to your wishes, you can use effects specially designed for the instrument. These include a 3-band EQ, a switchable sordino and a timbre function. The latter contains 15 convolution-based presets from renowned and experienced sound engineers for easy and characteristic modulation of the basic sound.

For the use of the Cello as 1st chair cello in an orchestral environment, there are also timbre EQs which place the viola in its correct position in the orchestra room. The final touch is provided by the “Room” and “Reverb” modules, which use professionally recorded convolution reverb presets to reproduce the sound of real rooms and can also be adjusted separately.

You are the artist!
The interface of the Emotional Cello has some advanced features to make it easier for you to play the library. For example, “PolyLegato” recognizes whether you are playing a bound melody line or a chord, and “Legato Trimming” allows you to manually adjust the speed of legato and portamento transitions.

The Attack function allows you to add an additional start sample independent of the currently selected articulation in order to let short notes flow in during legato playing or to simulate harsh starting notes. Correct tuning is also taken care of: Using the “Micro Tuning Option”, the most popular tunings can be applied to the viola, and completely new tunings can be created.

The Recording
Emotional Cello was recorded in the Mastermix Studio near Munich, in a wood-panelled room with high ceilings and the greatest possible distance from the wall. For the greatest possible flexibility of use, two Neumann microphones, type KM184 and U87, were used for close recording. In this way, the room was kept quite subtle, and you can then create your desired sound with your own effects. However, you can also use the integrated Convolution Reverb.

Please note: This is not a ‘standalone’ product. It requires the Kontakt Player from Native Instruments.